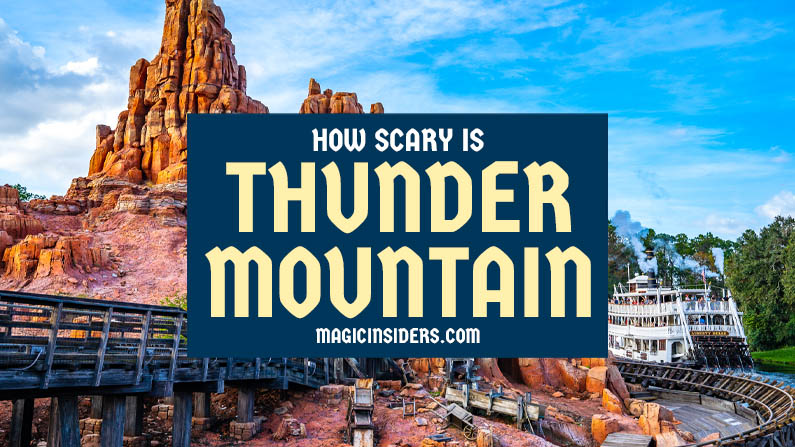 Big Thunder Mountain Railroad, or Thunder Mountain for short, is self-described as “the Wildest Ride in the Wilderness”. Because of this, some guests who’ve never experienced the ride may wonder how scary it is for them or children in their travel group.

I’ve ridden Big Thunder Mountain more than any other coaster at Walt Disney World, so I’ve got plenty of personal experience to share with you.

Disney describes the ride as racing “through a haunted gold mine aboard a speeding train” and I agree that the thrill of this ride is the racing effect on a rickety track.

But in all my years of riding Thunder Mountain, I actually never realized that the theme was meant to be haunted. So you can rest assured that the “eerie” factor here is not even remotely similar to that of the Haunted Mansion or Tower of Terror in Hollywood Studios. The entire experience feels quite normal, even at night.

Most people and children won’t have a problem with Big Thunder. The ride shouldn’t be too overwhelming for most guests unless they have severe back pain, are pregnant or in any other sensitive condition. You don’t have to worry about going upside-down or taking scary maneuvers, but there are lots of quick turns and a few short drops.

That’s the ride in a nutshell, but you have to read a little further into the details to get a better idea of whether or not the ride is okay for everyone in your vacation group.

Overall, Big Thunder Mountain located in Frontierland isn’t designed to scare guests. It’s is a lot of fun and it’s a family favorite for many, set during the American Gold Rush way out west. Personally, it’s one of my favorites and we often get Fastpasses for it. Big Thunder is ranked at the top of my Big List of Disney World Must Do’s.

I was 7 years old when riding Big Thunder for the first time and I loved it. It quickly became my favorite ride in Magic Kingdom and on my 12th birthday my poor family had to ride it six times in one day.

What I loved most about the ride when I was young is that it was just thrilling enough for my age. I was too scared to go on rides with inversions, but the rickety curves and short drops on Thunder Mountain was perfect for me. As an adult, I still enjoy the ride with friends and family.

Big Thunder Mountain Railroad is located in Frontierland next to Splash Mountain and has one of my favorite themes. Unlike most rides in Walt Disney World now, it’s not based on scenes from a movie but more of a real-world location.

Fastpasses are ideal and fairly easy to acquire. You don’t want to get stuck waiting for an hour in the middle of the day here; the outdoor line is covered but gets very hot quickly.

The line queue is also not very entertaining for younger kids, only offering a few small, mining themed features to keep guests occupied – you’ll really feel like you’ve stepped into the 19th century American West at this point. But the scenery that imagineers built for this ride is extremely unique.

Big Thunder Mountain itself is made to look like buttes from Monument Valley and throughout the ride you’ll go through a bat-infested cavern and a few tunnels, then pass several geysers and even exposed dinosaur bones uncovered during the dig.

Big Thunder Mountain Railroad has a maximum speed of 35mph, but the ride is so bumpy it can at times feel faster than that. There aren’t many straightaways on the track and the climbs and turns keep the speed fairly low.

Unlike other roller coasters that slowly pull to the top of a drop then race down the track, Thunder Mountain slowly eases into each drop. If speed is the chief concern for your group, I’d suggest riding at the front as you experience each maneuver much slower than the back of the train, which slings around each drop and turn.

Big Thunder Mountain doesn’t have big drops. There are a couple long stretches of track that make you wonder if you’re pulling up to a big drop. But in reality, you’re slowly easing into a big turn as opposed to a traditional long drop.

The “drops” featured on Thunder Mountain are mainly short dips that come out of nowhere and are more surprising than scary. The track seems to operate somewhat similarly to Space Mountain, where it uses gravity to pull the coaster down and around the maneuvers after a slow climb up the mountainside.

Most of the drops and curves you’ll experience are very suitable for children. The only factor to take into consideration is that you don’t squash them each time the ride takes a long curve – if you’re not careful, the force of each turn will send you sliding into your neighbor!

Each car in the vehicle has a long seat and lap pull-down bar which can hold two adult guests or one adult with two small children. Because of the long seat design with multiple guests in each row, it’s easier to slide into your neighbor at each turn, so hold on!

As I mentioned before, the front of the train will take turns and drops at a much slower pace than the back of the train. If you’re into a more thrilling experience, sit in the last row to go faster through each maneuver.

Hopefully you now have a better idea of whether or not Big Thunder Mountain Railroad is a good idea for your group. The ride may be intimidating for those who’ve never tried it, but most would agree that it’s a really fun attraction.

My best advice for anyone on the fence would be to make the jump and try it out! It really is one of Walt Disney World’s best rides, replicated in Disneyland, Tokyo Disneyland and Disneyland Paris.

PLANNING A TRIP TO MAGIC KINGDOM?

We have lots of helpful tips for first-timers and regulars alike and want you to have as much fun as we do! Check out our guide to the best Magic Kingdom lands at Walt Disney World so you know where to find the best experiences for your family.