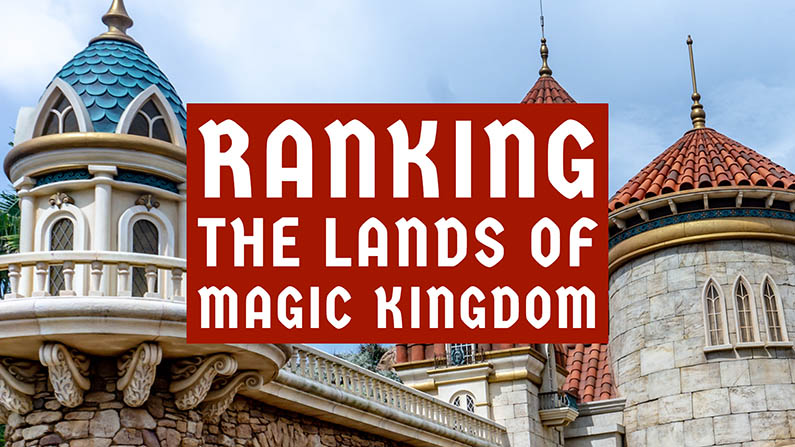 The six themed lands inside Magic Kingdom are each iconic in their own unique way.

This guide will tell you everything you need to know about the best Magic Kingdom lands, along with ranking each one.

We’ll start with our favorite land and work our way down.

Our pick for the best land in Magic Kingdom is Fantasyland. Of all the lands, it’s the one that is most the quintessentially “Disney”. Fantasyland uses the general theme of a magical, medieval carnival setting to achieve its general theme. Its unmistakable Disney magic and the sheer amount of attractions make it our top pick for best land.

There are lots of uber-popular rides in Fantasyland, so make sure to get your FastPasses in order. We’ve also got an awesome guide to Magic Kingdom FastPasses and ride rankings.

“Fantasyland is dedicated to the young at heart and to those who believe that when you wish upon a star, your dreams come true.” – Walt Disney

The Sections of Fantasyland

The Best Fantasyland Rides and Attractions

The Best Fantasyland Restaurants and Food

Frontierland is themed after the American West. It’s home to two of Magic Kingdom’s best thrill rides, Splash Mountain and Thunder Mountain. The Mountains, along with the classic American Disney theme, make it one of the highlights of Magic Kingdom.

The Best Frontierland Rides and Attractions

The Best Frontierland Restaurants and Food

Tomorrowland is the Magic Kingdom land that sticks out the most. It’s a futuristic, sci-fi themed land that has quite a few attractions, including guest favorite Space Mountain.

The Best Tomorrowland Rides and Attractions

The Best Tomorrowland Restaurants and Food

Adventureland’s theme alone makes it a great Magic Kingdom land. It’s definitely one of our favorites. The only reason we didn’t rank it higher is because of its lower number of top-tier attractions.

The Best Tomorrowland Rides and Attractions

The Best Adventureland Restaurants and Food

Main Street, U.S.A. is the unmistakable gateway to all things Magic Kingdom. Its ranking here is less to do with how much we like it and more to do with its lack of attractions. Main Street is more about shopping and dining than it is about typical park attractions.

Even though Liberty Square comes in at the end of our ranking of best lands in Magic Kingdom, that doesn’t mean we dislike it. It’s a great part of Magic Kingdom. It just doesn’t have quite as many things to do as many of the other lands.

If You’re in the Planning Stage…

We have a massive guide on Planning a Disney World Trip on a Budget. It’s got a lot of great tips and general information to help you get the most bang for your buck with everything Disney has to offer.