How Scary is Space Mountain? Space Mountain is one of the most popular and iconic rides at Disney World. Many guests wonder how scary it is, due to its famousness for being an indoor roller coaster in the dark.

I’ve ridden Space Mountain more times than I could ever count, so I’ve got plenty of personal experience with this one.

Space Mountain is not an intentionally scary ride. However, the ride’s darkness, speed, and jerkiness can be overwhelming for some younger guests. Space Mountain doesn’t have any inversions, but the track is very dark. Low visibility makes the ride feel faster than it really is.

Most older kids (and adults) shouldn’t have a problem. The ride shouldn’t be too overwhelming for most guests unless they struggle with dark environments or roller coasters in general. You don’t have to worry about the track sending you for an upside-down loop, but there are lots of quick turns and a few very short drops.

That’s the quick answer, but you have to get a little further into the details to get a good idea of whether or not the ride is okay for someone in your group.

Overall, Space Mountain isn’t designed to scare guests. Most kids (and adults) shouldn’t have a problem enjoying the ride without feeling too anxious. It is a lot of fun and it’s a family favorite for many. Personally, it’s one of my top priorities during a trip to Magic Kingdom and I almost always use a FastPass for it. It’s right at the top of my Big List of Disney World Must Do’s.

That’s not to say that the ride can’t be scary to certain guests. 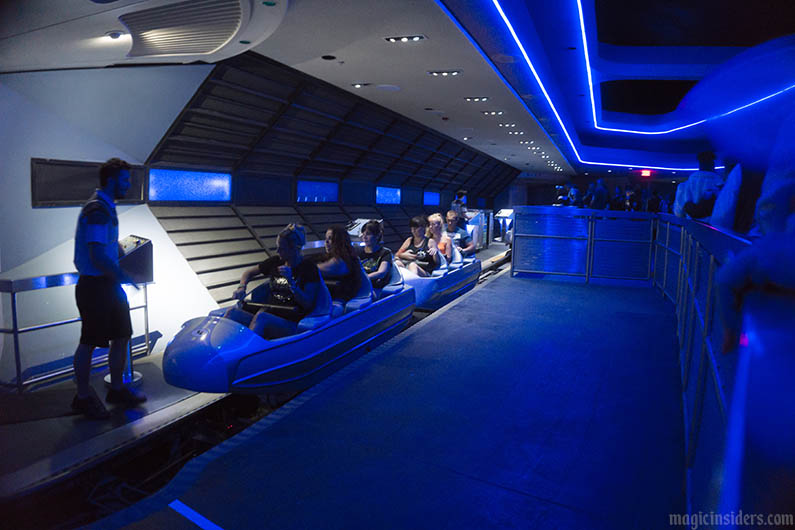 The ride is heavy on the dimly-lit “Space” theme. This is evident the moment you walk into the line queue. The walkway leads you through a series of dark pathways with fluorescent blue lighting until you get to your vehicle. I definitely wouldn’t describe the lighting as fear-inducing, but it’s totally possible for little ones to get an eerie vibe from it.

A soundtrack playing ambient music and space noise plays throughout the experience. This helps the otherworldly feel to the ride in a way that isn’t creepy.

All in all, don’t worry too much about Space Mountain’s theme or environment unless your child has a hard time dealing with the dark. The line queue does a great job of setting the stage for the ride, so it’s a good way to gauge how you feel about the whole experience. If you feel that the line queue alone is overwhelming your child, you can expect for the ride itself to be a more intense version of this.

Space Mountain has a maximum speed of 28mph, but most of the ride is slower than that. There aren’t many straightaways on the track and the constant turns keep the average speed fairly low. The beauty of Space Mountain is the illusion of speed created by the ride environment.

You won’t be able to see much at all for the majority of the ride. You’ll just barely be able to see some of the track’s infrastructure during the fast parts of the track. The low visibility can sometimes make you feel like you’re going to hit your head on low-hanging cross sections, but rest assured that you’re completely safe.

I can’t tell you how many times I’ve talked to folks who are scared to put their hands in the air on Space Mountain because they feel that they will hit something. The darkness makes you feel like everything is a lot closer than it really is. In reality, you could be a giant and still couldn’t stretch far enough to make contact with anything.

That said, it’s hard to resist the urge to duck your head when you can just barely make out the details of a fast-approaching bar that looks like it’s only a couple of feet above you. Kids don’t get this sensation quite as much though, as most of them don’t sit high enough to see everything. I got an extra dose of this sensation when I was holding my camera up (the same camera I recommended in this post) in order to film the ride.

I’ve had the opportunity to ride Space Mountain with the lights on and I can tell you firsthand that it feels much slower that way. But it’s actually a bit more unnerving with the lights on because you can clearly see all of the areas of the track that are right above you as you zip by.

Space Mountain doesn’t have big drops. Both of the ride’s tracks only have a few small drops, but it’s a stretch to even call them “drops” in a traditional roller coaster sense. They’re more like quick dips in the track.

From beginning to end, the coaster keeps moving, meaning there aren’t any suspenseful pauses before any of the tiny drops. All of the drops happen within the general flow of the track and they’re over before you really have a chance to feel like you’re truly falling. I’ve never seen an official measurement, but I’d guess that none of the Space Mountain drops could be much more than 20ft.

If you’ve ever been on Splash Mountain, then Space Mountain’s drops will be laughable by comparison.

Space Mountain’s uses a single-file 3-seat vehicle. This means that you don’t share your seating area as you do on many other coasters that put you side by side with another guest.

The seating layout is a bit cramped, but it’s nice not to have to share a seat. This can be a bit of a problem if you have a child that is nervous about sitting by his or herself, but you’ll still be close behind them. As long as you’re in the same vehicle, you’ll only be a few feet in front of or behind your fellow rider.

My advice would be to put any anxious riders in the middle seat, especially if they are children. The middle seat will probably prevent them from seeing straight ahead and that should help them feel a little more secure.

Hopefully you now have a better idea of whether or not Space Mountain is a good idea for your group. The ride may be intimidating at first glance, but that’s really only because of the dark space theme. The track itself is actually pretty tame for a roller coaster. Honestly, you’d probably even be underwhelmed if you saw the track with the lights on.

My best advice for anyone on the fence would be to make the jump and try it out! It really is one of Disney World’s best rides. The design has held up through the years and it still does an awesome job at using a dark atmosphere to make a slow (for a roller coaster) track feel faster and more exciting.

Let us know how it felt when your family finally conquered Space Mountain!