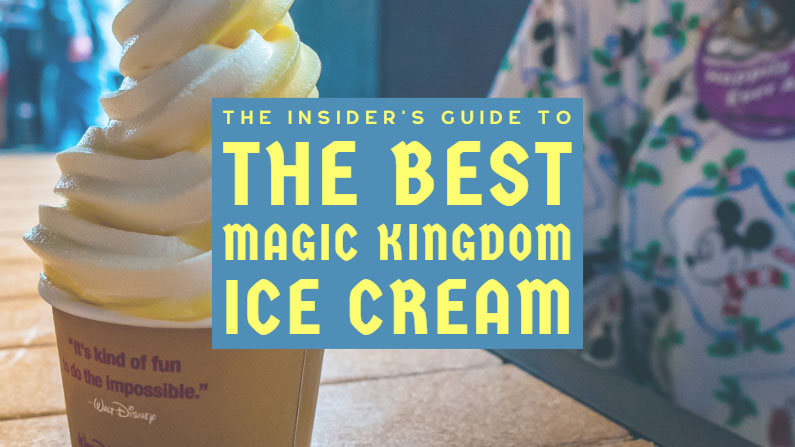 A day at Magic Kingdom isn’t complete without some ice cream. Thankfully, you’ve got plenty to choose from.

This guide will tell you everything you need to know about the best ice cream Magic Kingdom has to offer. Whether you’re looking for a fruity pineapple soft serve or a creamy ice cream sandwich, we’ve got you covered!

The legendary Dole Whip is the undisputed king of Magic Kingdom ice cream. And it’s not even technically ice cream. It’s a pineapple soft serve dessert that is synonymous with a day at the Magic Kingdom.

What makes it so good: Everything. Flavor, appearance, nostalgia- the Dole Whip is the frozen dessert at Magic Kingdom. The soft serve pineapple goodness comes perfectly swirled in a cup and is just the right size for one person. It’s non-dairy, so it’s awesome for a quick dessert that won’t make you feel overly full.

There are three variations- regular Dole Whip, a Dole Whip Float, and Pineapple Upside Down Cake served with Dole Whip. The float adds pure pineapple juice to the equation and is always a good choice.

Where to get it: Dole Whips are served at Aloha Isle. You can find Aloha Isle inside Adventureland, next to the Enchanted Tiki Room, right behind that big spitting camel attached to The Magic Carpets of Aladdin ride.

Our recommendation: If you’ve never had a Dole Whip, stop everything and go get one. It’s a rite of passage for all Disney lovers and shouldn’t be overlooked. Whether you go get one early in the morning, in the midday sun, or late at night, you can’t go wrong.

There are few things better than a Dole Whip float on a hot Florida day. It’s the best Magic Kingdom ice cream by a large margin. Disney has also been introducing seasonal Dole Whips flavors every few months, so check out the specials for unique flavors when you browse the menu.

The only ice cream desserts that can compete with a Dole Whip are over at Epcot. If you plan on visiting Epcot, then you definitely need to take a look at our Ultimate Guide to Epcot Ice Cream.

Coming in second, the Ice Cream Cookie Sandwich is a good way to get a heavy dose of sugar in both baked and frozen form.

What makes it so good: If you’ve eaten a lot of other cookie ice cream sandwiches, you’ve probably noticed that they can be a pain to eat if the cookie is too crispy. That’s where Magic Kingdom’s Ice Cream Cookie Sandwich delivers.

It uses the perfect fresh-baked cookies for the sandwich. They aren’t too soft or too hard and are just the right amount of “chewy” for eating with ice cream.

Where to get it: The Plaza Ice Cream Parlor is where you need to go to get this one. The Parlor is on Main Street U.S.A., across the street from the Casey’s Corner hot dog shop. You’ll know it by the waffle cone smells wafting about Main Street.

Our recommendation: If you can’t decide between eating ice cream or a baked good, this is the ice cream dessert for you. Thing one will definitely fill you up, so bring your appetite.

The Citrus Swirl is another Magic Kingdom classic. It’s a frozen orange juice soft serve dessert. The Orange Cream Cup is a newer addition and is basically the Dole Whip’s orange brother. We put both in the #3 spot because of their similarity and shared location.

What makes it so good: The Citrus Swirl is tart soft serve that is made mostly from orange juice and is swirled with vanilla soft serve ice cream. The Orange Cream Cup is an orange version of the Dole Whip and is noticeably sweeter than the Citrus Swirl. Both have a “float” option as well.

Where to get it: Both can be found at the Sunshine Tree Terrace at the front of Adventureland.

Our recommendation: If you like the pineapple Dole Whip and also like orange, you’ll love the Orange Cream Cup. And if you’d like to get something more tart, combined with vanilla, the Citrus Swirl is excellent. Florida is serious about its oranges and has a rich history of growing citrus.

Both of these ice creams do a great job of representing Florida. If we had to pick one of the two, we’d have to go with the classic Citrus Swirl. It has just the right amount of tartness to sweetness.

All of the goodness of a sundae served in a fresh waffle bowl.

What makes it so good: This is a pretty easy answer: the waffle bowl. The Plaza Ice Cream Sundae has all of the normal ingredients of a sundae- two scoops of your favorite ice cream flavors, hot fudge, whipped cream, and cherries. Those things are good enough by themselves, but become way better when the waffle bowl is added.

The waffle bowls are freshly made and don’t come out of a bag, so they are particularly delicious.

Where to get it: The “Plaza” Ice Cream Sundae is served, no surprise, at the Plaza Ice Cream Parlor.

Our recommendation: If you’re looking for a super-classic ice cream dessert, this is as good as it gets. Mix up the ice cream scoops and add the peanut butter topping if you want to make it even better.

Even though the Mickey Bar isn’t exclusive to Magic Kingdom and can be found anywhere on the Disney World property, it would be criminal to exclude it from this list.

What makes it so good: The Mickey Bar is the quintessential Disney World ice cream. Period. It’s a tried and true classic that can be found at pretty much every ice cream cart on the property. It’s so simple, but it’s so good.

I’ve tried so many similar ice cream bars, but none of them quite get to the level of the Mickey Bar. The dark chocolate shell is the perfect thickness and the vanilla ice cream inside is just right.

Where to get it: Pretty much every ice cream cart at Magic Kingdom serves these bad boys.

Our recommendation: We can’t even begin to tell you how many times we’ve forsaken fancy ice creams at Disney World and gotten a Mickey Bar instead. If you want a simple, inexpensive, and delicious ice cream treat, the Mickey Bar will never disappoint.

Something about walking around Magic Kingdom just makes Mickey Bars taste even better. They also make for a good Disney photo op, something you’re probably already well aware of.

The Strawberry Smoothie is a little more unique for frozen desserts and is a great recommendation for those looking to be a tad “healthier” in the dessert department.

What makes it so good: The strawberry flavor is so crisp and sweet, making it a great light refresher for a hot day walking around the Kingdom.

Our recommendation: If you’ve had enough of regular old ice cream or you have a love of strawberry desserts, this is a good choice. It’s nothing spectacular, but it’s just different enough and is still very good.

Sometimes you just need a classic float. Root beer is the popular choice, but you can also order your float with other sodas.

What makes it so good: There’s nothing novel about Magic Kingdom’s Root Beer Float, but that doesn’t make it any less appetizing. The vanilla soft serve and ice cold root beer are perfect companions.

Where to get it: You can find the Root Beer Float at Auntie Gravity’s.

Our recommendation: If you want a quick pick-me-up, an old-fashioned root beer float is always great. It’s not quite as heavy as many of the other ice creams on this list, but is still filling. If you’re thirsty and have a craving for ice cream, problem solved.

If you’re looking for a metric ton of sugar, the Doughnut Sundae is probably a perfect fit.

What makes it so good: This sundae takes a warm brownie and adds two scoops of ice cream, whipped cream, hot fudge, and a cherry. It’s a classic knock-your-socks-off kind of sweetness.

Where to get it: The Brownie Sundae is served at the Plaza Ice Cream Parlor.

Our recommendation: If you’re the kind of person who loves a sugar coma, or you just love brownies, this is a great ice cream dessert. The brownies are always fresh and the ice cream and toppings make it a whole new creation.

The Apple Blossom Sundae is basically an apple pie a la mode with some toppings.

What makes it so good: The apple pie with caramel sauce used for this sundae is good enough to stand alone. Adding two scoops of your choice of ice cream just makes it that much better. Then it’s topped with whipped cream and a cherry.

Where to get it: You’ll find the Apple Blossom Sundae at the Plaza Ice Cream Parlor.

Our recommendation: If you love apple pie with ice cream or are just want something extra American, you’ll definitely enjoy this. Like almost all of the other Disney baked goods, the apple pie itself is great.

It’s not quite as iconic as the Mickey Bar, but the Mickey Ice Cream Sandwich is still a classic treat.

What makes it so good: It’s cheap, tasty, and easy to find. It can often be overshadowed by the Mickey Bar, but it’s still a great option for a traditional ice cream sandwich.

Where to get it: All over Magic Kingdom at the same ice cream carts that serve Mickey Bars.

Our recommendation: If you love a classic Klondike bar, or if you want something cheap and easy that isn’t a Mickey Bar, the Mickey Ice Cream Sandwich is your best bet.

Mickey’s Kitchen Sink is expensive and can sometimes have a bad rap, but it’s still fun for Magic Kingdom guests who want a shareable ice cream dessert inside a souvenir sink.

What makes it so good: Presentation is everything for Mickey’s Kitchen Sink. The sundae itself is made up of two scoops of ice cream, hot fudge, whipped cream, and a cherry. But the real reason most people order this sundae is that it comes with a souvenir sink styled to look like Mickey’s red pants.

Where to get it: Like most of the sundae’s on this list, Mickey’s Kitchen Sink is also found at the Plaza Ice Cream Parlor.

Our recommendation: If you’re just looking for a sundae and nothing else, we prefer some of the other options on this list, but it’s undeniable that there is a certain appeal to getting a souvenir bowl styled like classic Mickey.

Mickey’s Kitchen Sink is intended for sharing, so split it with someone and then try not to fight over who gets to take home the souvenir bowl.

As you can see, Magic Kingdom has a ton of variety when it comes to ice cream. Every guest should be able to find something that fits their preference.

Hopefully, this list helps you spend more time enjoying the park and less time trying to decide what ice cream to order. You really can’t go wrong with whatever you choose.

And again, we urge any ice cream lovers to also check out our Ultimate Guide to Epcot Ice Cream. Epcot has the best homemade ice cream that you can find anywhere at Disney World and we definitely recommend that you make your way over to find out.