How Scary is Seven Dwarfs Mine Train? 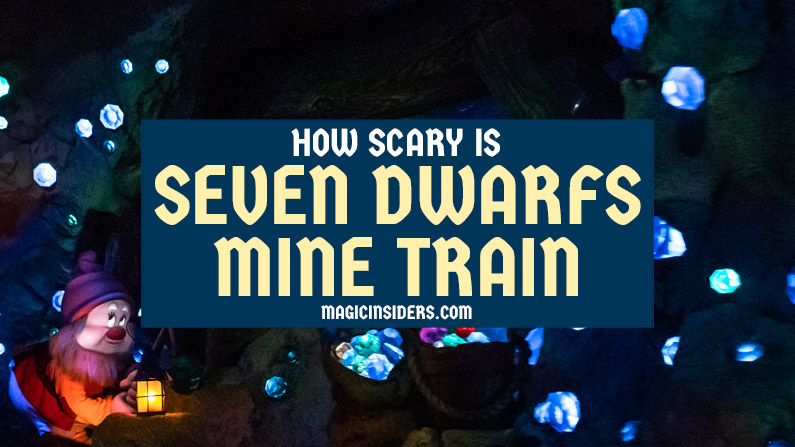 Wondering if the new Seven Dwarfs Mine Train is scary for crew? Never fear, Magic Insiders are here!

This quick guide will tell you everything you need to know about the ride’s speed, drops, theme, and more. It’s one of Magic Kingdom’s best and most popular rides, so we highly recommend it.

Let’s dive in and see if the attraction is a good fit for you and your traveling companions!

Contents hide
1 IS SEVEN DWARFS MINE TRAIN SCARY?
2 THE MINE TRAIN EXPERIENCE
3 CONCLUSION
4 STILL PLANNING YOUR DAY AT MAGIC KINGDOM?

IS SEVEN DWARFS MINE TRAIN SCARY?

Seven Dwarfs Mine Train is a steel roller coaster ride with small humps, quick turns and moderate speeds. Since the ride is shorter than expected, most guests would describe it as underwhelming and simple. However, it has a few key features that make the experience memorable and fun for people of all ages.

This popular roller coaster sits at the center of Fantasyland and is hard to miss. The attraction’s theme is appealing to people of all ages who love Snow White and the Seven Dwarfs. We would venture to say that most people would never describe the ride as scary, but it has a few elements that could surprise younger audiences.

The Seven Dwarfs Mine Train is very tame with a few quickly traversed turns, short bursts of speed and a couple hills climbed overall. Nothing will pop out at you during the ride, but you will encounter the Evil Queen in her witchy form at the end if you look closely for her.

The Evil Queen can be seen knocking on the door of Snow White’s cottage while Snow White and the Seven Dwarfs dance happily inside. Most guests won’t even notice her as you have to physically look back to see her before the ride ends.

The big drop featured on the Mine Train is 39 feet tall, but we can assure you that the feeling is nothing similar to Splash Mountain’s 50 footer. The drop is positioned in a turn, so instead of heading straight from the top to the bottom, you are curving into the drop and it won’t take your breath away.

Aside from this, there are no overwhelming parts of the ride that would scare guests. There is a dark tunnel you’ll go through where the ride slows down for you can watch the dwarfs work on their gem mine, but this part is very happy with the dwarfs singing “Heigh-Ho” as you make your way through.

THE MINE TRAIN EXPERIENCE

Seven Dwarfs Mine Train was created after Snow White’s Scary Adventures ride was closed in Fantasyland – which, by the way, might have been considered scary for younger audiences. If you remember this ride from Magic Kingdom days past, erase it from your memory because the Mine Train is nothing like it.

The Mine Train is actually quite enjoyable despite being so short of an experience. One of the best ride comparison’s would be to the Barnstormer in the Story Book Circus section of the park. By comparison, they are both fairly short steel roller coasters with a fun theme and smaller thrills to suit younger children.

The reason why the Mine Train grew so much in popularity is not only for it’s newness to the park, but also for it’s enthralling technology. Similar to Frozen Ever After in the Norway Pavilion at Epcot, the Mine Train features audio-animotronics with animated faces projected onto each character.

These characters are able to make multiple faces, sing realistically and perform humorous activities as they mine for gems. This is probably the most engaging and fun part of the ride, watching the dwarfs work and sing “Heigh-Ho” just before you make the climb for the 39 foot drop.

Again, this drop feels very similar to the rest of the ride – easy, flowing, gliding and not very fast. Since the drop is positioned into a curve, it hardly feels as though you are actually dropping. And before you know it, the ride has ended!

Disney requires that children must be at least 38 inches to ride Seven Dwarfs Mine Train. We estimate this as the average three to four year old and would agree that this is the perfect age to begin enjoying the Mine Train.

If your child loves the Barnstormer, Peter Pan’s Flight or Pirates of the Caribbean, there’s no doubt that they will thoroughly enjoy the Seven Dwarfs Mine Train.

The theme of the Mine Train is based on the Seven Dwarfs work at the diamond mine. You’ll start by gliding through the forest outside, hearing tinkering and hammering inside the cave. After a few fun turns and hills, you’ll come to the mine itself.

The vehicle will slow down for you to capture photos or just enjoy the experience of watching the dwarfs whistling and working inside the glittering mine. You’ll be able to spot every single dwarf and note their personalities with the very life-like audio-animatronics.

Doc will announce it’s time to go home with a bellowing “Heigh-Ho” as you make your way up the ramp to continue the ride in the forest outside. The coaster will swing into a few more turns before coming to a halt next to Snow White’s cottage.

Inside the cottage you’ll see a perfect depiction of the dancing scene from the Snow White movie, where the princess dances with two dwarfs together as the others play various instruments. As stated before, a quick look back at the cottage door and you’ll catch a glimpse of the Evil Queen.

Seven Dwarfs Mine Train actually speeds as fast as 34 mph during the ride. However, the majority of the coaster has fairly low speeds, especially through the diamond mining scene. The fastest speeds you’ll achieve are through the turns, which feel faster than they actually are due to the ride vehicle’s design which we’ll touch on shortly.

The Mine Train has one drop of note that you can view from outside the ride if you’re curious to see how others are handling it. You’ll notice that most of the guests are smiling and happy and not screaming in terror here.

As we mentioned before, the drop – while 39 feet high – is actually one big curve that feels more like a long turn than a true drop. The rest of the maneuvers taken on the ride are small hills and thrilling back-to-back turns that have a fun “running” feeling to them.

The ride vehicle is the main catalyst for the ride’s perceived speed and movements. The vehicle is essentially a barrel cut in half, seating four guests (two and two) per barrel.

The interesting part is that these barrels are not simply stuck to the coaster, but they move freely and independently from the other barrels. So, the g-force is seemingly elevated in the barrel swinging it back and forth as you glide through turns and traverse hills during the ride.

This makes the ride all the more enjoyable as you have a little control over the swinging that these barrels will do if you choose to lean into the curves to enhance the swing.

Most guests will agree that this fun and lighthearted ride is nothing to be scared about. It’s a perfect option for the whole family to enjoy together, even for the toddlers in the group.

We’ve done our best to explain the details here, but nothing beats the real experience. If you’re traveling with anyone of any age, we urge you to try this one!

We’ve created several helpful posts for you to reference as you plan your next trip. Check out our guides on the Lands in Magic Kingdom, Magic Kingdom Tips & Secrets, and Magic Kingdom Fastpass Tiers. All hold great details for you to consider to make your vacation the best possible!