How Scary is the Haunted Mansion? 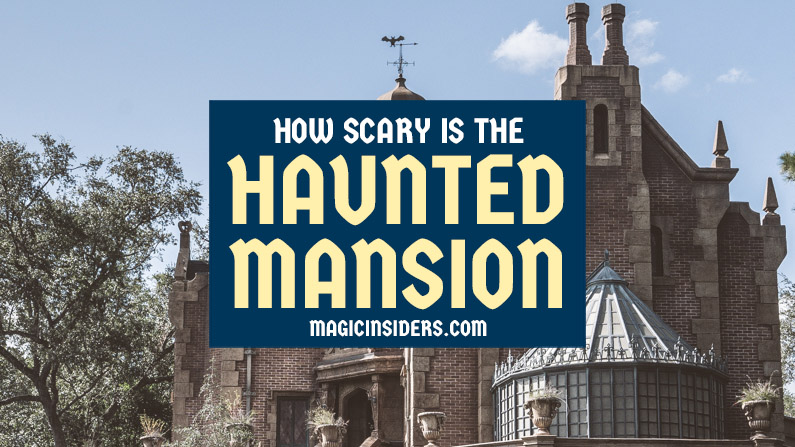 The Haunted Mansion is one of the most classic rides at Walt Disney World. It’s so famous since it’s initial opening at Disneyland that the ride has been replicated in every single Disney park around the world. If you’ve never been on it before, you may be wondering how haunted it really is.

I’ve ridden the Haunted Mansion as a child and as an adult and have loads of information to share on this topic!

Is The Haunted Mansion Scary?

The Haunted Mansion is not meant to be as “scary” as it is meant to be a lighthearted take on traditional haunted houses. It is filled with “grim grinning ghosts” and spooks that are more likely to make you smile than cower. However, the ride takes place in total darkness and features moving objects, eerie music and chilling scenes that can be scary for younger or more sensitive children.

Starting with the exterior, the Haunted Mansion may not seem so frightening in the sunlight, but no matter what time of day you hop aboard your “doom buggy”, the interior of the ride is very dark. This may make some guests a little uneasy.

Rest assured that nothing will pop out in front of you or even come near you during the continuously moving ride as you glide from creepy scene to funny scene. But the darkness of the ride can make you feel like something could leap out at any moment.

Most people and children won’t have a problem with Haunted Mansion. The ride shouldn’t be too overwhelming for most guests unless they have no tolerance for scary things. This ride is best compared with children’s Halloween movies like Casper or Disney’s the Haunted Mansion; cartoon ghosts with spooky effects.

That’s the ride in a nutshell, but you have to read a little further into the details to get a better idea of whether or not the ride is okay for everyone in your vacation group.

The Haunted Mansion was originally created with the intent to humor audiences with a little after-life fun. While most of the haunts you’ll see on this ride are fairly tame and silly at times, there are a few moments that may get a little darker for those who scare easily.

There is no height requirement or recommended age suggested by Disney. Going off our initial judgement, we think that children 5 years and older should be fine riding on the Haunted Mansion.

I was 7 years old when riding the Haunted Mansion for the first time and while I held on tightly to the adult I was with, it didn’t totally freak me out. That’s saying a lot since I haven’t generally had a high tolerance for frightening things at any age.

I believe parents should assess their child’s emotional state, give as much information as possible about the ride and then determine whether or not this is a good idea for them.

The Haunted Mansion is just that: a large mansion with looming trees, rundown exterior and a graveyard for the entryway. There are supposedly 999 happy haunts living in this decrepit estate, whether they’re found making noises under tombstones in the line queue or flying through the air inside the ride.

From start to finish, there are silly plays on words and phrases, hysterically dressed spooks and jovial songs to lighten the mood. Although the Haunted Mansion is very dark, filled with cobwebs and glow-in-the-dark objects, there’s much to enjoy about the ride.

You’ll begin by entering a dark study where the narrator tells his story on the Haunted Mansion. You’ll be escorted to a completely enclosed room with creepy pictures to set the mood for the ride and afterwards be led through a dark hallway to hop aboard your “doom buggy”.

Your “Ghost Host” will narrate the entire ride from room to room, introducing you to many different characters who can be seen bursting through coffins, holding a seance, celebrating a birthday, and eventually entering your vehicle through the beauty of mirrored technology.

Most will find the humor in all of this, but if these descriptions alone are too scary for you, I suggest watching a video of the ride before going.

Fastpasses are ideal as most wait times for Haunted Mansion average about 40 minutes. You don’t want to get stuck waiting for an hour in the middle of the day here; the outdoor line is covered but gets very hot quickly.

The Haunted Mansion is set on a continuously moving track, similar to Spaceship Earth or Under the Sea with the Little Mermaid. It moves very slowly from room to room, so you won’t get jerked around while trying to watch the scenes on the ride.

The ride will stop on occasion when there is a hold up at the ride’s loading or unloading stations. This can make the experience a little more eerie for those who get stuck in one of the darkest scenes of the ride, especially if you have to wait a while before it starts back up again.

We don’t want to give the entire ride away, so we’ll focus on three of the most memorable special effects used in the Haunted Mansion to hopefully ease your worry about what you’ll see during the ride. First, you’ll encounter the stretching room. It gives the illusion that the room is moving, but the walls are really just set on an expanding base that moves up and down.

Madame Leota is the most famous ghost on this ride and can her floating head can be seen in the seance room with other floating instruments, charms and objects. Madame Leota is one of Disney’s original Imagineers whose face is projected onto the crystal ball at the center of the room.

The scariest part for me as a child was imagining a hitchhiking ghost hopping into our vehicle for the ride. This is thankfully not the case! These ghosts are comical and are simply an image of a cartoon ghost projected onto the mirror in front of you to look like they’ve boarded your doom buggy.

This is the extent of the most advanced special effects on the ride. Most of the ghosts are glow-in-the-dark, feature silly faces and are doing more comical things rather than scary things.

The “Doom Buggy” is a black, half-sphere of a vehicle with a bench in the middle that can accommodate two adults or one adult with two children. It’s equipped with a pull-down lap bar to secure it’s occupants in place.

The buggies are set on a continuously moving track and allow each patron to board with ease as they move very slowly at the loading station.

There is no “best seat” on this ride; all vehicles will give you the exact same experience. They will shake a little at certain points to enhance the haunted effect and will turn for you to face certain scenes, but always stay locked to the track and never deviate.

Hopefully you now have a better idea of whether or not the Haunted Mansion is a good idea for your group. The ride may be intimidating for those who’ve never tried it, but most would agree that it’s a humorous attraction.

My best advice for anyone on the fence would be to make the jump and try it out! It’s a beloved and classic ride at all of the parks and is worth going at least once for the experience.

Planning a Trip to Magic Kingdom?

We have lots of helpful tips for first-timers and regulars alike and want you to have as much fun as we do! Check out our guide to the best Magic Kingdom lands at Walt Disney World so you know where to find the best experiences for your family.