Yes, You Can Go Inside That Big Ball at Epcot! This is How. 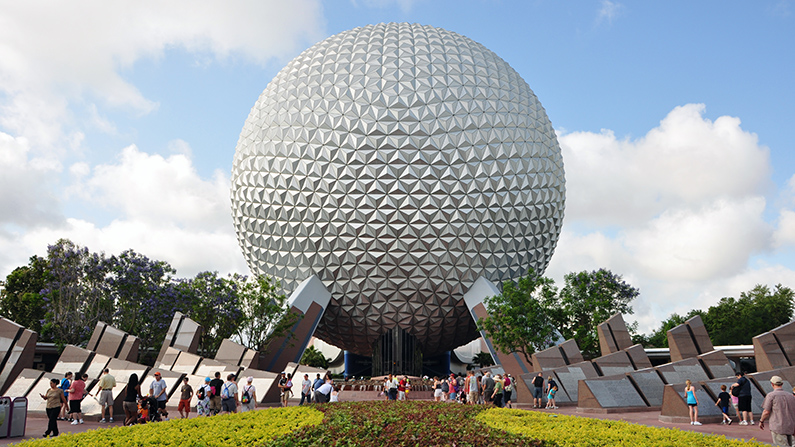 “Can You Go Inside The Epcot Ball?”

Epcot’s most iconic feature is a gigantic silver ball located at the very front of the park. If you’ve ever seen Epcot in person or in a photograph, it’s almost a guarantee that you have seen it.

That big ball is called Spaceship Earth. It is a structural marvel of engineering on the outside and it features a full ride for you to experience on the inside.

We’ll give you a rundown on what exactly Spaceship Earth is, along with what to expect when you go inside it.

The History of Spaceship Earth

The design team for Spaceship Earth was large and Disney even brought in science fiction writer Ray Bradbury to contribute to the process. MIT engineers were also called upon to help figure out how exactly to best execute the design.

Spaceship Earth belongs to a category of structures known as “geodesic spheres“. It stands at 165 feet tall and is 518.1 feet around. The weight of the entire structure is over 15,000,000 pounds!

While it may look like it’s suspended in mid-air, there are actually four supports anchored 160 feet into the ground.

You’ll be happy to know that you can stand directly underneath Spaceship Earth in the rain and stay perfectly dry. The design of the sphere makes it so that all water travels through 1-inch gutters all the way down the building and transports the water directly into Epcot’s World Showcase Lagoon.

Pretty impressive stuff for what looks to be a giant golf ball!

Spaceship Earth has been updated off and on over the course of time. During the year 2000, a gigantic Mickey Mouse arm holding a wand was added to the exterior of Spaceship Earth. It came down in 2007 in order to restore the structure to its original form in time for Epcot’s 25th anniversary.

In 2008, Judi Dench became the new voice of the ride, narrating the entire experience.

Extra: If you want to reward yourself after conquering Spaceship Earth, check out our Ultimate Guide to Epcot Ice Cream.

How to Get Inside + Spaceship Earth: The Ride

If you’ve always wanted to go inside Spaceship Earth, you’re in luck! Anyone with an Epcot ticket can go on a journey through the entire structure from the comfort of a track ride.

You’ll be staring up at Spaceship Earth the moment you enter Epcot’s front gates. From here, just walk straight toward it. Once directly underneath, you’ll see two lines, one regular standby line and one Fastpass line. If you chose to get a Fastpass for the ride, you’ll be able to bypass most of the waiting in line. You can find out more about booking Fastpasses for Spaceship Earth, as well as other Epcot rides and attractions in our Epcot Fastpass Tiers story.

Once you enter the building, you’ll be directed by an Epcot employee to board a track-bound vehicle with room for four guests, two in the front and two in the back. You’ll quickly start your ascent through Spaceship Earth.

The general theme behind Spaceship Earth is humankind’s journey through time and the developments that have been made on the way. This journey is presented in the form of animatronic people and elaborate sets.

Your first stop on the journey through history will feature early humans working together to hunt a gigantic woolly mammoth. After that, you’ll go on to learn about the beginning stages of written communication, from cave paintings to the Phoenician alphabet.

Greek and Roman society make appearances, featuring a large scene depicting Rome and Greek scholars discussing mathematics. Michelangelo can be seen painting the Sistine Chapel in one scene during the Renaissance. Johannes Gutenberg operating his printing press is in another, just to name a few.

Stages of American history also play a large role in the Spaceship Earth ride. In one section, you’ll travel through the inside of a newspaper factory at the end of the Civil War.

A gigantic computer room demonstrates just how large the first computers were. Driving directly through the middle of a garage, you’ll see an American man slouched over one of the first home computers, intending to represent Steve Jobs or Steve Wozniak as the most modern figures showcased in the attraction.

When you reach the very top of the track, your vehicle will turn to face a planetarium projected on the ceiling of Spaceship Earth. You’ll see constellations, along with a large projection of Earth.

After you pass through the planetarium, your vehicle will automatically turn 180 degrees. You’ll be riding in reverse from here on out. The first part of the descent will take you through a sea of stars in the form of dangling lights. When you’ve passed through the stars, the ride will be mostly dark and the screen in front of you will illuminate.

To keep you busy for the remainder of your dark descent, an interactive video will play on a touchscreen monitor built into your vehicle. The portrait automatically taken early in the ride will be used to put your face on a cartoon character. That character will represent you in the video.

The video has a variety of situational factors that will change depending on how you answer a series of questions. Your character will be placed into comical scenarios depicting your potential futuristic life.

Immediately after leaving your vehicle, you’ll walk through a pathway leading you to a giant globe. Pay attention to the spot on the map that you marked as your home. You’ll see your face, along with any of your friends’ faces, depicted on the map. A lot of people overlook this part of the attraction, but you can actually send their futuristic picture to themselves or a friend as a postcard. Look for the kiosks in the middle of the room and fill out the information to send a postcard.

Everything inside this part of Spaceship Earth is known as “Project Tomorrow”. There are a series of interactive games, including a shuffleboard game and a driving simulator.

In 2019, it was announced that an update to this attraction will happen in the near future. It hasn’t been revealed at this point, but as soon as the attraction is updated, we’ll discuss it on this post. You can go see the Epcot Experience in the Odyssey building, located off of the Mexico Pavilion, for a teaser video on this update and more to come at Epcot.

While You’re at Epcot…

If you’re in the process of planning your vacation to Epcot, you may find our posts on Epcot Tips & Secrets or The Insider’s Epcot Dining Guide helpful while you determine what you’d like to do while there.