How Scary is Pirates of the Caribbean? 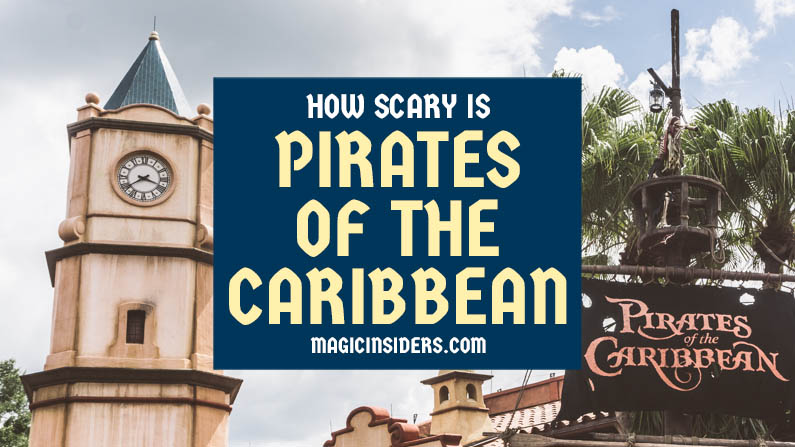 Wondering if the Pirates of the Caribbean ride is too scary for your crew? Don’t worry matey, we’ve put together a quick guide to make sure you know exactly what to expect!

Pirates of the Caribbean is the last ride envisioned by Walt Disney himself, along with the help from his original Imagineers. It’s a popular water ride in Disneyland that was brought to Magic Kingdom at Walt Disney World using audio-animatronic figures and realistic pirate settings.

This is the ride that inspired the popular film series of the same name, so look for similarities throughout where the ride inspired the movie, and vise versa.

It’s definitely one of the must-do’s at Disney World for virtually any fan.

IS PIRATES OF THE CARIBBEAN SCARY?

Pirates of the Caribbean is not a scary ride overall. The pirate theme and the notable darkness of the ride may be intimidating for younger audiences, but the ride is fairly slow moving, gives you little chance of getting wet and displays friendlier and more humorous scenes than what you may initially anticipate.

Pirates of the Caribbean is located in Adventureland at Magic Kingdom in Walt Disney World and has a pretty standard exterior with “Dead Men Tell No Tales” ringing through the streets as you pass by. The line queue is very unique, taking you through low-lit passageways reminiscent of a dingy island fort with supplies and several fake people in jail cells playing cards or chess.

Aside from a few bones or full skeletons laying around, don’t expect for it to get scarier than this. Nothing will pop out at you while you wait in line, nor will anything jump at you during the ride itself.

Once you climb aboard your vessel, the ride will take you through many scenes that are similar to the movie and some that are completely unique to the Pirates of the Caribbean ride. There is one single drop that passes through a dark tunnel and is about 10 ft in depth. This may give you a slight bottoming out feeling that lasts for maybe a second.

Other than that, there is a ship scene where Captain Barbossa is bombing the city and an illusion of cannons hitting the water might be scary, with pretty tame splashes around your boat, but the scene doesn’t last for long and it’s pretty smooth sailing after this.

That’s the quick answer, but we have much more information broken down for you to get a real idea of what the ride entails.

THE PIRATES OF THE CARIBBEAN EXPERIENCE

Pirates of the Caribbean is one of our most favorite rides in Magic Kingdom for nostalgia and uniqueness. It uses the Disney signature audio-animatronic characters for the majority of the ride which feels quaint and kitschy, but adds so much depth to the experience.

We also love how this water ride feels like you’ve boarded a john boat and are floating through these different scenes of island towns, beaches and caverns. Thankfully, the slow pace of the ride does not cause much splashing so you’re not likely to get wet.

Once you’ve hopped aboard the ship, you’ll slowly drift into a few caverns where you may encounter Davy Jones, Black Beard or Captain Salazar in the mist. You’ll also pass by some stranded pirates who met their unfortunate doom hunting for treasure. As mentioned before, nothing is popping out or appearing suddenly, you’re simply floating past these scenes.

The scenes you’ll pass by include Captain Barbossa bombing the Puerto Rican harbor, Tortuga’s drunkenly animated residents, an auction, pirates singing happily while their town burns and the iconic jail scene where the inmates are bribing the dog with a bone for the keys.

The coolest part about the ride is the addition of three different Captain Jack Sparrows hidden among these scenes. You’ll see him popping his head out of a bucket, peering around a corner and at the end, find him happily rocking in a chair amidst loads of gold and treasure.

Parents will be glad to know that there is no height limit for Pirates of the Caribbean. As a matter of fact, there aren’t even safety restraints on this ride. This supports our previous point that the ride moves slowly and will not alarm most people with it’s movements.

Personally, we feel that this assumption by Disney is very accurate. After having ridden Pirates many different times, I would feel comfortable bringing children as young as two or three on this one.

Parents with babies may want to evaluate whether or not they want to bring them along, but rest assured they will not get bumped around too aggressively or cramped on the ride.

Expect to see tons of treasure, townspeople causing a raucous, farm animals, ships, soldiers, sailors and more of the like on this humorous ride. Throughout its entirety, you’ll be serenaded by the popular song “Yo Ho, Yo Ho (A Pirate’s Life for Me)” both in instrumental form and sung by the pirates themselves.

If you loved the Pirates of the Caribbean movies, you’ll certainly enjoy the ride. It employs the same level of adventure and fun that you’d be familiar with from the films.

We’ve mentioned already that the speed on Pirates is very slow. The fastest part might be at the one drop early on in the ride, simply because you’re falling. Aside from this, you float along at a steady, slower pace.

The water helps solidify the pirate-y theme of the ride, as you glide through these scenes in your small vessel. The water levels stay a few inches below your boat, and because you’re moving slowly it’s rare that you’ll get splashed.

The only time you may get wet during the ride would be during the cannon fire where water splashes around you, or at the end of the drop when the water splashes then settles (this is a risk of sitting at the very front or on the sides).

Pirates of the Caribbean has only one drop and you’ll experience it in the first third of the ride. After you’ve made your way through the misty caverns of Dead Men’s Cove, a bright flash will go off for your picture and you’ll enter a dark tunnel with the short drop.

We stated before that this one has a slight bottoming out feeling but you hit the end of the drop so quickly, the feeling doesn’t last long. It serves as the only jarring excitement that thrill-seekers will get to experience on this ride.

Aside from that, Pirates is very tame in moving slowly from scene to scene. Definitely no Splash Mountain-level drops.

The ride vehicle is a small vessel that the cast members call your “ship”. It’s far from any appearance of a ship and looks more like a huge dinghy that seats multiple rows of people.

Each row will hold about four average-sized people comfortably. On days when the park is very busy, they may load the boat to capacity, but most times you won’t be crammed into the row. These benches have no safety strap and the vehicle doesn’t have handles for you to hold.

If you want to guarantee you won’t get splashed in the slightest on this ride, we suggest sitting in the middle or back of the boat and sit toward the center of your row. However, if you want the best views on the ride, sit at the front or on either side of your row.

At this point, we’ve tried not to give the entire ride away, but you should have a pretty good feel for what to expect in terms of its “scary” factor. Most everyone will enjoy the Pirates of the Caribbean ride, especially if they enjoyed the movies.

Younger children shouldn’t have a problem with the ride itself, but may need some hand-holding during the dark parts or at the drop. Other than these two aspects, this slow moving water ride is fun and amusing.

We can help there too! We have a monster guide to Planning a Disney World Vacation on a Budget. It covers everything you’d ever need to know, from resorts and dining to tickets and transportation. Whether you’re a first-timer or a Disney veteran, you’ll find tons of tips and advice for saving money on your trip.