How Big is Epcot?

I’ve you’ve ever been to Epcot, you know that it feels like the largest, most walkable park at Disney World. I’ve heard countless guests wonder how big Epcot really is without getting a clear answer, so I did some research myself.

The numbers you see here may differ from some of the common measurements you see elsewhere. I actually measured Epcot’s areas manually with a mapping tool in order to get the measurements that make the most sense for guests. I tried to exclude as much empty land and unused area as possible in my measurements.

How big is Epcot?

Epcot is 305 acres (.476 square miles) in total area. The distance from Epcot’s gates to the back of the park is just under 1 mile and takes about 15 minutes to walk. These stats mean that Epcot is the second largest park at Disney World, following Animal Kingdom’s 500+ acre park.

Don’t be fooled though- Epcot is actually the largest park in terms of guest-accessible areas. Much of Animal Kingdom’s acreage is taken up by animal enclosures and empty land, so its title of “Largest Disney World Park” can be a bit misleading. The walkable guest areas at Epcot absolutely dwarf the walkable guest areas in every other park. There is a lot to see and do.

Comparing Epcot’s size to the other Disney World parks

Below is a direct 1:1 comparison that shows exactly how much bigger Epcot is than Magic Kingdom 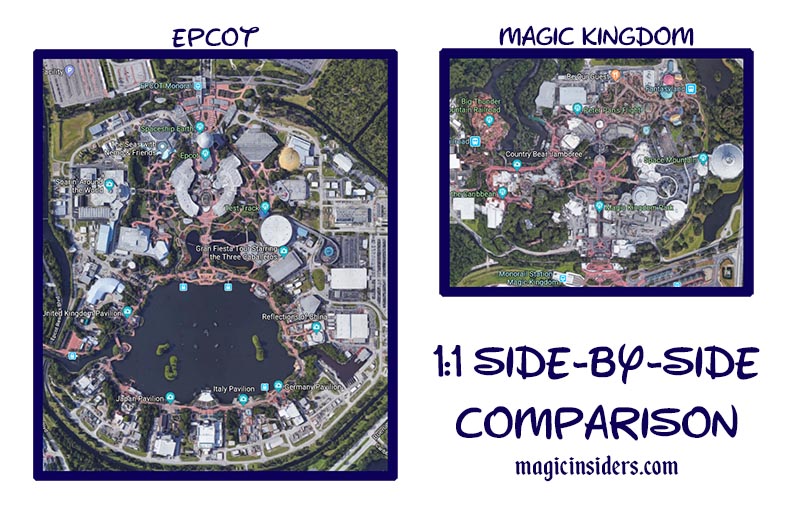 Long story short, one of the first things you’ll learn during a trip to Epcot is that the park is huge. It feels way, way bigger than all of the other parks and it can take a lot of time and energy to walk around. The World Showcase alone is bigger than most theme parks around the world.

It’s not at all uncommon for Epcot guests to walk 6+ miles during a day at Epcot. Personally, I’ve seen plenty of examples where friends’ pedometers read over 10 miles after a full day walking around the park. That’s a ton of steps and it can really tire you out. Wearing proper footwear is always something I stress for guests spending a week at Disney, but it’s even more important for long days at Epcot.

A common Epcot acronym joke is that the name stands for “Every Person Comes Out Tired”. Not a surprise when guests are often walking over 10,000 steps while inside the park.

How big is the World Showcase?

Epcot’s World Showcase is about 115 acres (.195 square miles) in total area. The distance around the World Showcase is 1.2 miles and will take you about 20 minutes to walk. The total area could be calculated to be slightly more or less, depending on how you factor guest/non-guest areas.

In general, the 115-acre figure is based on the World Showcase’s guest areas and its supporting backstage areas. Take a look at the image below to see the map I drew around the Showcase’s perimeter. 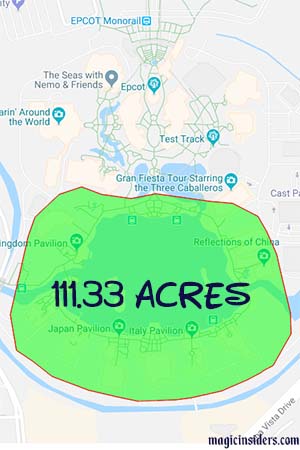 There are 11 total “Pavilions” that make up the World Showcase. Most folks are pretty familiar with how it works, but the Pavilions are each themed for a specific country. Each country has unique experiences, restaurants, and other attractions. Most of the World Showcase is outdoors, but there are tons of indoor areas as well.

Most of the World Showcase’s Pavilions are between 2-3 acres in total area. Based on my measurements, The American Adventure is the largest Pavilion and takes up over 4 acres. That may not sound like a lot of space for each country, but each Pavilion is densely packed with attractions, shops, and dining.

The World Showcase is especially well-liked by adults. Which is why I created a pretty big guide dedicated to the ins-and-outs of all of Epcot’s best grown-up fun.

How big is the World Showcase Lagoon?

During Epcot Forever (Epcot’s nightly fireworks show), it’s common to see crowds of guests lined up pretty much all the way around the Lagoon. That helps to put into perspective just how many people can be jammed into the World Showcase.

How big is Future World?

Epcot’s Future World is about 70 acres (.109 square miles) in total area. This includes everything from the park’s entrance to The Seas Pavilion and over to Test Track.

Future World may not seem that big if you walk right through the middle of it to get to the World Showcase, but it’s actually quite large. There’s a lot of walkable area from side to side and indoor areas like The Seas Pavilion and The Land Pavilion are huge by themselves.

The map below shows the perimeter I drew around the Future World section of the park. Again, I tried to exclude as much unnecessary surrounding area as possible. 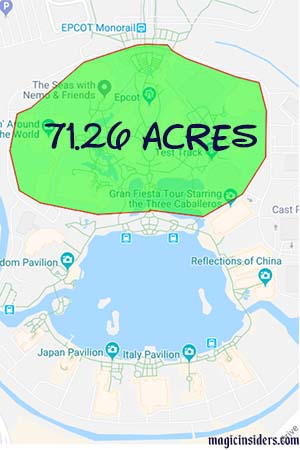 The moral of the story is this: Epcot is MASSIVE. The whole park truly is an engineering marvel. There’s so much to see, experience, and explore, which is why it’s typically my favorite Disney World park to visit. (I’m usually there at least once a week and I wrote this piece right before spending an evening at the Food & Wine Festival.)

Feel free to share your Epcot experiences. I’d love to know who has the record for “Most Miles Walked at Epcot”.