Does Epcot Have A Parade? 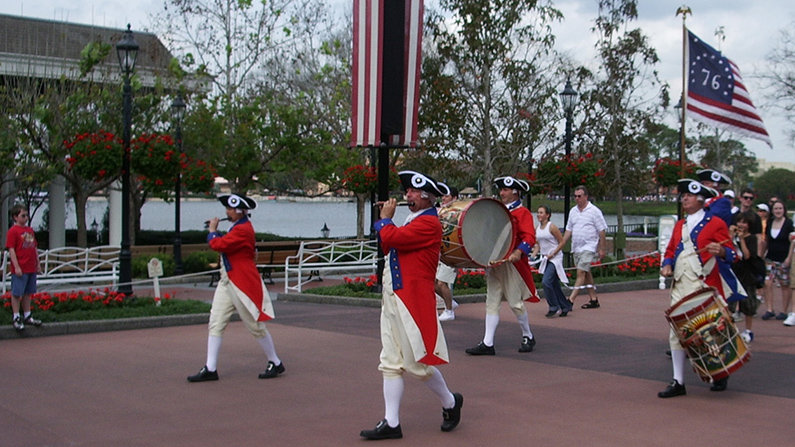 Walt Disney World has several parades throughout the parks, but many guests frequently wonder “Does Epcot have a parade?”

Epcot does not currently have a featured parade. However, that doesn’t mean that there aren’t some fun alternatives.

We’ll tell you our favorite things to do at Epcot in place of a parade, along with a little bit of park history.

Parades of Epcot’s Past

When Epcot first opened in 1982, there was a huge parade that circled the entire World Showcase. It featured many different characters and performers in an impressive display. This inaugural parade didn’t last long though and came to a halt after only a handful of showings. There were plans for a new parade in the 80’s but they never came about.

Fast forward to October of 1999 and Epcot launched a new parade called Tapestry of Nations. This parade was created to celebrate the coming millennium. It had three different legs inside the World Showcase that each performed at the same time. Tapestry of Nations was originally intended to run until the end of the year 2000, but it was extended until fall of 2001 due to its popularity.

The colonial marching band, Spirit of America Fife & Drum Corps used to play at Epcot, but stopped performing there in 2014.

Even though there isn’t a park-wide parade at Epcot, there are plenty of entertainment options to fill the void. We’ll include some of them here for you.

Even though it’s technically a fireworks show and not anything like a parade, Harmonious is far more unique than your average, run-of-the-mill nighttime spectacular. It combines fireworks, pyrotechnics,  incredible light work and water technology with music to create something special. It’s definitely a strong enough show to satisfy anyone’s need for evening entertainment.

The Voices of Liberty are an a cappella singing group that performs an array of traditional American songs. They are a fixture at Epcot and are very popular with guests. You can find them inside the main American Adventure building in the American Adventure Pavilion singing in the rotunda.

When they’re available, you’ll find these performers inside the China Pavilion at the World Showcase. They have been performing at Epcot since 2011, showing off amazing skills with all sorts of acrobatic feats. They perform during the day and are easy to find. You can find them right at the front of the China Pavilion when performing. They are hard to miss and can be seen from the main World Showcase path.

This display was recently updated in the Norway Pavilion Stave Church. It features carvings of the Norwegian gods, beautiful artistry and ancient artifacts worthy of being showcased in a museum. The gallery offers a nice hideaway from the heat of the day and a little lesson on Old Norse myths and legends.

There’s a talented mariachi band that plays music throughout the Mexico Pavilion and they’re a crowd favorite. Mariachi Cobre sings beloved music from the animated movie Coco along with classic Mexican folk songs. They are typically found in front of the gigantic Mayan pyramid and play a variety of traditional Mexican folk music.

Command Performance is a popular stop for anyone passing through the UK Pavilion. This act consists of artists from Great Britian who perform live shows on the gazebo stage at the back of the pavilion. Their shows cover a variety of British rock classics from the 1960’s to the 1990’s.

When available, this lively set of performers plays on stage at the front of the Morocco Pavilion. Crowds will gather around to listen to them when they are playing, so it’s easy to find them. Their stage is directly on the main World Showcase path, so you can’t miss them.

Matsuriza is a drum show located in the Japan Pavilion. Performers play the large Japanese drum, called a taiko. Dancers accompany the impressive drum beat, which increases in temp as the show goes on. This is a particularly cool show and our favorite among the shows listed here. You can find the Matsuriza show on the stage of the giant 5-story pagoda directly at the entrance of the Japan Pavilion.

When available, Serveur Amusant is a team of French acrobats that perform a pretty cool street show. Most of their act relies heavily on great balance. One of the best parts of their act is the classic chair stacking. They reach scary heights with tiny margins for error. They are easy to find and will be at the very front of the France Pavilion when performing, right on the main World Showcase path.

These guys wander around the Future World section of Epcot and can be hard to reliably locate. They are musical janitors, singing and banging on makeshift instruments while they clean their way around the park. They do their best to gather a crowd and involve the audience to make your walk through the park a little more amusing.

There are three indoor theaters inside Epcot’s World Showcase which were recently updated with new footage. Each one tells a story about the country it represents and you can find them in Canada, France and China. They are worth a viewing and are a great way to relax in the air conditioning for a while.

This film is shown in a theater equipped with 360 degree screens, making it very immersive. The new footage for the film reflects the splendor and beauty of China in perfect circle-vision. The film will take you to many of China’s most iconic locations, including the Great Wall and Beijing’s Forbidden City.

Beauty and the Beast Sing-A-Long

By the way, the sing-a-long is enjoyed best with some French ice cream from the shop next door. It’s the #1 pick on our Ultimate Guide to Epcot Ice Cream.

Finally, Canada Far and Wide is another film that features beautiful footage from the country. Narrators and Canadian natives, Catherine O’Hara and Eugene Levy, take you on a journey through Canada’s provinces and cultures from East to West, explaining what makes this vast region so unique.